These are fragments of the Cartledge family story. With a focus is on James Cartledge 1810 - 1877. Initial posts are from previously published articles. 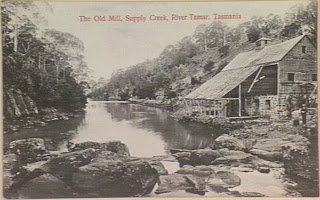 Supply River Mill was built in 1825 by a Mr. Charlton and leased to George Cathcart. On the Arrowsmith Map of 1832 it was noted as Beverages Mill. Some twenty five kilometres north of Launceston, on the western side of the Tamar River, the mill was located in an isolated spot. In the early days it was subject to attacks by aborigines and bushrangers. Two workers are said to have been killed in such attacks.

By 1842 the mill was owned by Guillan and Syme. They employed two apprentices, James (Philosopher) Smith and Thomas Monds. Smith then sixteen years old, went on to become a dogged mineral fossicker. Besides finding various mineral deposits around the North West, discovered the Mount Bishoff tin deposits.
Monds stayed with milling, purchasing the Carrick Mill with the assistance of John Cartledge, and founding the company that was to become the present Monds and Affleck.

The Supply Mill, as with others of the day, was highly labour intensive. Grain and flour had to be lifted with block and tackle or manhandled within the mill and to and from the ships servicing the mill. There were two pair of four foot six inch (135cm) millstones, and the usual dressing and cleaning equipment. The small building, besides housing the machinery and grain, accommodated up to six people. (Port Dalrymple Story, Bethell)

While there was not sufficient water to operate the mill for four months of the year, working night and day the mill could grind up to forty tons of flour a week. In 1844 the schooner ‘Dusty Miller’, carrying 120 tons of flour worth ₤70 per ton, was wrecked in Portland Bay. The ship and cargo were not insured and Guillam and Syme became bankrupt.

James and John Cartledge then rented the mill. According to the census of 1848 John operated the mill, while James looked after their other enterprise, the Union Water Tanks in Launceston. The census notes that the owner of the mill was Mr Yates, John Cartledge was listed as the person at the head, or in charge. On the night of the census there five people residing at the mill.

An advertisement appeared in the Cornwall Chronicle throughout February of 1848:

SALE BY AUCTION
ELIGIBLE INVESTMENT FOR CAPITALISTS
Where an industrious man of such means may speedily acquire an independent fortune.
MESSRS. UNDERWOOD AND EDDIE,
Are instructed by Mr. Yates to sell by auction, at their rooms
in Charles Street, on Wednesday, the 1st March next.
All those powerful WATER CORN MILLS,
Known as
THE SUPPLY MILLS
Situate in the improving
TOWNSHIP OF EXTER,
ON THE WEST BANK OF THE TAMAR.
Eighteen Miles from Launceston.

On this valuable property there is a never-failing supply of water, rendering the mill capable of grinding and dressing 56,000 bushels of wheat per annum, and might, with a trifling outlay, be made capable of manufacturing double the quantity.
The mill consists of a large three-story wooden building thereto attacked, containing three pairs of the very best 4ft6in. French stones, two very superior 6gt, dressing machines, and one very excellent smutting machine, with going gear, sack tackle& etc., & etc., complete.

There is a weather-boarded residence close to the Mill, containing six rooms, and also a miller’s cottage near the same.
There are ten acres, substantially fenced in, out of which a splendid garden of two acres is enclosed, in which the gardener’s home of two rooms is erected and the garden is stocked with the choicest fruit tress, in full bearing.
On this splendid property there is ample space for two or three Mills or Manufactories in addition to the Mill now erected thereon, and as the water in the Supply River is secured by Grant Deed to the exclusive use of the proprietor, intending purchasers may render the site one of the first importance in point of revenue investment, as the quality of the water is so pure as to be admirably adapted for all the purposes of paper manufactory.
The river Tamar is navigable to the Mill Door, alongside of which vessels of fifty tons burthen may discharge their cargos.
Title- a Grant from the Crown.
Terms – Twenty per cent deposit on the day of sale: £700 may secure the property at 8 per cent: for the residue, bills at 4, 6, 9, and 12 months, bearing bank interest,.
The Mills at present are let to respectable tenants, at £200 per annum.
For further particulars, apply to Messrs. Jennings and Grubb,
Solicitors, Launceston; or to Mr. Yates, Cataract Mill Launceston. Supply River Mill

If nothing else the advertisement shows that Real Estate hyperbole was alive and well last century. Estimates of production failed to recognise that the water flow was consistent for only eight months of the year.

The promised returns seemed to overlook the fact that the same paper was carrying daily reports of poor prices and lack of movement at that time in the grain markets. It is known that besides their rental of £200 pa., and sundry other costs, the Cartledges were paying Smith and Monds £50 each pa. Little wonder, perhaps, that the property was passed in at bidding.

While the brothers operated the mill they were filling Government contracts throughout the north of the state. The brothers had purchased a schooner the ‘Tamar Maid’ to service the mill and James had the schooner ‘Cousins’ built at the site in 1852.

An advertisement in the Cornwall Chronicle (6 Mar. 1852) signalled the brothers’ break with the Supply Mill:

In the early 1850s Smith and John Cartledge left milling and headed for the Victorian goldfields, a story for another post.